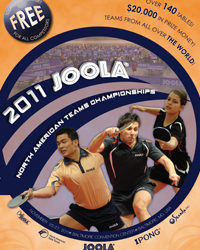 About The Tournament The JOOLA North American Teams Table Tennis Championship is like no other tournament in the world! It’s bigger, better, unique in its format and its atmosphere. In terms of attendance, it’s the single biggest table tennis event in America. Why do so many people keep coming back, year-in and year-out? Word[…]

**The NYC Open has been rescheduled for this coming labor day weekend.  For more information, please click here! Also, the registration will be reopened again until 12pm, Friday.** A USATT SANCTIONED FOUR STAR EVENT!   This year’s New York City Open is bigger and better than ever!  Prize money has been expanded to $16,000 and we’re in[…]

2011 Western Open on the JOOLA NA Tour February 19th and 20th, 2011 Recreational Sports Facility, University of California, Berkeley Berkeley, CA In 13 years of doing tournaments with NATT, this was the most extreme and exciting Tour event I’ve ever seen, both from an organizer’s perspective and a spectator’s view.  If you were a[…]