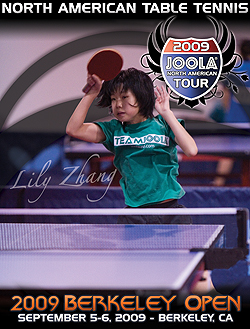 The 2009 Berkeley Open
ON THE 2009 JOOLA NORTH AMERICAN TOUR

Back to where we started the season!  But by now, the field is swelling, the juniors are improved, the drama of the events to date have built new rivalries!  Unchanged is the gracious and helpful nature of our hosts, the UC Berkeley TT club.  What better way to spend Labor Day Weekend?

Three full basketball courts with bleachers are our home for the weekend, well-lit, wooden floored and air conditioned.  Parking is tight in Berkeley; early arrivals will like the paid lot across the street.  There are tons of restaurant choices in easy walking distance in this college setting.  Seats at the playing hall are usually at a premium, so if you own a folding chair this is the time to bring it!

The atmosphere is friendly and convivial and play in the Open and upper divisions is top-notch.  Umpires working this event under the direction of Dr. Azmy Ibrahim have been among America’s best.  NATT underwrites activity fees for the UC Berkeley Golden Bears Table Tennis Club in exchange for the hall, so playing here supports Collegiate Table Tennis.

Proof of Membership:
All participants must be able to show proof of current membership with USATT or an ITTF recognized body.
Membership can be renewed or purchased at the event.

Entry Deadline:
Entries must be postmarked by FRIDAY, August 21, 2009

Refunds:
After the entry deadline, no refunds.

Ratings:
Ratings from the July/August issue of the USATT Magazine will be used for qualifications.  Seedings based on most current ratings.

Policies:
Players may not enter two events with identical start times.  Events can be cancelled or combined at the discretion of the tournament committee.  No prizes will be awarded for splits,dumps, default losses or no-shows.  Play will be conducted under ITTF rules and NATT policies.  USATT dress code will be enforced.  All decisions of the referee are final.