The JOOLA North American Teams Table Tennis Championships is an annual competition, bringing together over 200 teams totaling nearly 1000 players from all around the world to compete for $20,000 in prize money. The event uses approximately 150 tables, 2,000 table tennis balls, and 150,000 square feet of the Baltimore Convention Center. It has been an annual event in Baltimore, Maryland since 1998 and is often referred to as the biggest table tennis tournament in the world!

How does the tournament work?

The 2011 JOOLA North American Teams Table Tennis Championships is a teams based competition where each team consists of three to five players. The teams are separated into divisions based on their average rating and results during the preliminary rounds on the first day. On the second and third day, teams battle other teams in their division in an effort to be the champion of their respective divisions! Here is a visual guide to help you understand how the a team tie would work. 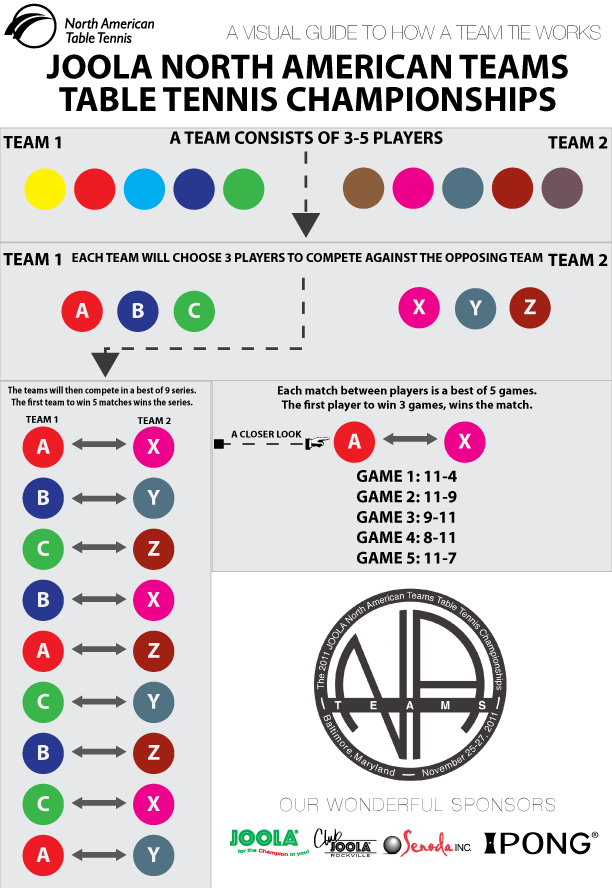 With entries from around the world, the JOOLA Teams Championship attracts a very competitive field . For some of our most skilled players, the Teams is their first American appearance. While we rely on information gathered from their International matches, trying to forecast their performance here can be difficult! Will they be able to reach the Championship? We play the matches to find the answer. Here are the known top contenders for the $10,000 first place prize in the Elite Division.