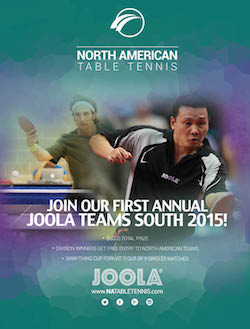 Team tournaments are different. They’re more dramatic with more hinging on your match than just your own success. If you’ve never made the trip to the DC area for North American Teams, this is your chance to see what all the excitement is about.

The appeal of Teams is simple: plenty of high quality play. You’ll get to play *lots* of matches against players of similar level. Teams are three, four, or five players with three taking part in any given team match. Sign on with a group of five and you’ll have some time off to rest or watch the top division. Be a part of a team of three and you’d better be ready for a strenuous two days.

Team matches are Swaythling cup format: five matches out of nine. Each of the nine potential individual matches is a singles match played best three of five.

Since this is a two day tournament, we’re diving straight into the divisional play. Teams will be seeded based on the combined rating of the three top players on the team and placed into division 1, 2, or 3. Each division will consist of two groups (1A and 1B, 2A and 2B, and 3A and 3B) of eight teams playing a round robin to determine who advances to the semifinals on Sunday afternoon. Two teams will advance from each group (so the top two teams from 1A will advance to the semifinals of division 1 against the top two teams from division 1B, etc.)

Division 1 champions will get to divide $3000. Division 1 runners-up share $1500. Each team losing in division 1 semifinals gets $750. In addition, *every* divisional champion receives a free entry to the North American Teams in DC in November (one per team).

Entry fee: $499, but to kick off our inaugural event and make sure it’s a big success, this is being discounted to $299!

Proof of Membership:
All participants must be able to show proof of current membership with USATT or an ITTF recognized body. Membership can be renewed or purchased at the event

Entry Deadline:
Mailed entries must be postmarked by FRIDAY, August 7, 2015.

Refunds:
After the entry deadline, no refunds.

Ratings:
Ratings from August 14th will be used for qualifications. Seedings based on most current rating.

Policies:
Players may not enter two events with identical start times. Events can be cancelled or combined at the discretion of the tournament committee. Events with insufficient entries may be cancelled and refunds issued. No prizes will be awarded for splits, dumps, default losses or no-shows. Play will be conducted under ITTF rules and NATT policies. USATT dress code will be enforced. All decisions of the referee are final. All U.S. prize money winners are required to provide Social Security numbers. All International prize money winners are required to provide Passport/ VISA. We are required by U.S. Department of Treasury to withhold 30% tax on all prize money recipients from countries that do not have a treaty with the U.S.

Tournament Schedule
Teams must be paid in full before start of tournament!

Team Information:
Ratings of the top three players on each team from August 14th will be used for seeding. To help ensure close matches, the spread between a team’s highest rated player and the teams qualifying rating as of July 31st (the average of the three middle players; the bottom three in a four person team) will be capped:

Prizes: (Awards for all champions and finalists in all divisions)

*Division and group sizes are subject to change depending on number of entries.

Few options within walking distance. Plan to bring your own food or be ready to drive. Below are a couple of the closer options.